Vertis – The benchmark carbon contract moved in a range of 57 cents last week, as buyers lifted the price back above 11 euro whenever it fell below this psychologically important level.

The EUA Dec18 started the week in line with the previous Friday’s settlement price at 11.12 euro and in the first half of trading on Monday it hit a new local high at 11.38 euro, a level not seen since September 2011. Most of the day, the price traded in a range between 11.23 and 11.35 euro, but buyers were less active in the afternoon and left the price decline to 11.06 euro. The front year carbon contract finished the day with a marginal loss of 4 cents (-0.4%). The traded volume of 22.2 million was the highest since 27 February.

After the shooting star candle on Monday, many market participants expected the carbon price to decline on Tuesday. And indeed, the price fell below 11 euro, to a daily minimum at 10.97 euro in the morning. The strong auction and higher power prices, however, invited buyers to the market and they lifted the price to a new 7 year high at 11.50 euro. The price remained stable until the end of the day and closed with a gain of 2.9%.

The benchmark carbon contract opened on Wednesday at 11.40 euro, slipped to 11.24 euro before stabilzing. The price fell further in the afternoon to an intra-day low at 11.07 euro. It recovered by the end of the day and closed at 11.18 euro, but still down 22 cents.

The front year carbon contract opened at 11.17 euro on Thursday. The price reached an intra-day high of 11.30 euro. The price closed at 11.19 euro, a marginal gain of 1 cent from Wednesday.

The EUA Dec18 moved in a narrow range of 28 cents on Friday. The price fell continuously in the morning to hit a daily minimum at 10.99 euro, but at this points buyers stepped in and lifted the price back above 11 euro. By the end of the day the price remained at 11.17 euro, two cents below Thursday`s settlement.

Higher auction volumes, lower power prices and further free allocation is expected to keep the price of EUA Dec18 below the 11.50 euro hit last week. Compliance buyers, however, may keep the price above 11 euro.

From the technical analysis’ point of view, at current levels the price is still overbought (RSI at 71), but should the price consolidate in the range market saw last week, the relative strength index could return into neutral territory.

The carbon market will receive negative signals from the higher auction volume and milder temperatures around Europe. In a negative scenario, the Marubozu line at 10.87 euro and the Fibonacci level at 10.44 euro could serve as support levels. Latter almost overlaps with the 20DMA at 10.42 euro.

On the other hand, compliance buyers were quite active below 11 euro and they could limit losses this week as well. In a positive scenario the new 2018 high at 11.50 euro would be the first resistance, followed by the upper Bollinger band at 11.66 euro. 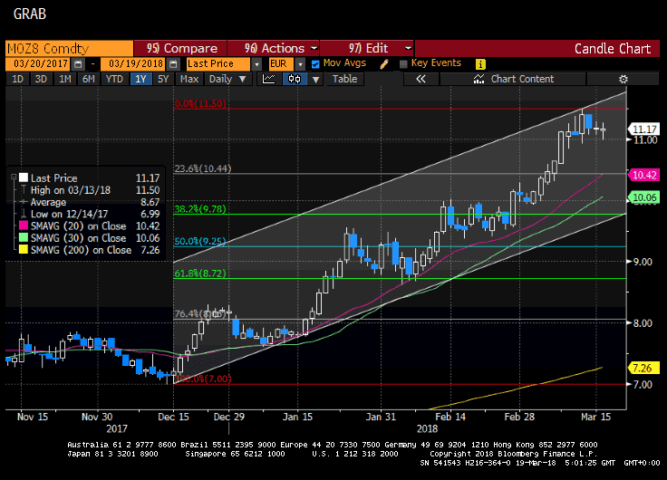