After several unsuccessful attempts to push EUAs to new highs, sellers finally gave up on defending 58 EUR level. The market broke out violently and closed at 59.90 on Friday. Bullish pressure continued on Monday, when EUAs breached another milestone at 60 EUR. Even though sharp and one-sided moves have tendency to be at least slightly retraced, support at 60 EUR is holding so far. As of today, the new all-time high sits at 61.90 EUR, most likely due to strong bullish continuation in European energy complex as whole. Some analysts anticipated the move to occur at the beginning of August, while others thought it would happen at the end of year. Halved auctions have yet again proved to be one of the key drivers in market pricing, along with options activity. The nearing of quarterly September option expiry might have caused some additional volatility in the market in the recent weeks. Although the largest strike for that expiry is at 60 EUR/EUA with 9.6 million EUAs, it appears the market is heading towards 65 EUR level with 8.7 million EUAs of open interest. Daily trading volumes have been moderate, as on average 20 million EUAs traded daily (20 days rolling average for Dec21 contract). For as long as sentiment remains stable and major financial and commodities markets up-trending, EUAs might likely follow, especially due to ever tightening environmental policies. 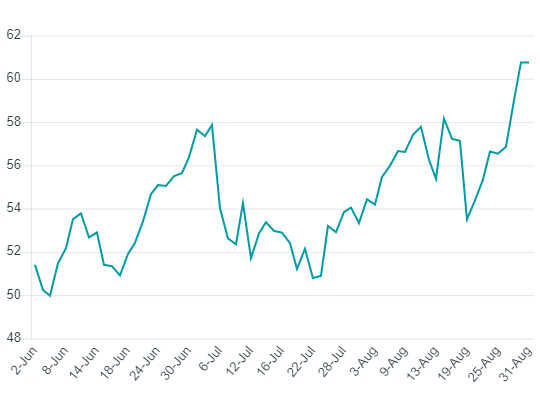