2021 ended on positive note with consolidation at around 80 EUR. Year-to-date gain of 142 percent is impressive and although it was not the largest percentage gain in history, it was was record breaking for EUAs in terms of absolute price moves. Front year futures contract rose by almost 50 EUR, with all time high at 90.75 EUR. For comparison, EUAs rose by 34 percent in the year prior, however yearly percentage range was similar to 2020. Average daily trading volume for the most liquid futures contract, delivery in December 2021, was 27 million allowances in 2021. Market remains well supported at the beginning of 2022 as weather forecasts, low gas supply and closure of nuclear power plants provide a lot of demand in undersupplied market. Daily auctions will resume on Monday, January 10, with slightly reduced quantities. Total auction volume planned for 2022 is around 490 million allowances, down from circa 710 million last year. Out of 490 million, more than 108 million allowances combined will be offered for capitalization of Innovation Fund and Modernisation Fund, which would provide more than 8 billion EUR of funding if market stays at current levels. Option activity, which was one of the major driving forces for EUAs last year, is steadily increasing, however open interest is still lagging behind compared to this time last year. Put-call ratio is in favour of calls, however value of 0.74 might indicate moderate to healthy bullish bias. Largest strike at 80 EUR, however, has extremely bullish put-call ratio, of 0.15, which could remain a reference value and technical or sentimental support. Important strikes are stacked every 5 EUR to the upside, with strong psychological level at 100 EUR, with open interest of 14 million allowances. Despite lower open interest above mentioned price points, calls have been trading all the way up to 160 EUR. Triple digit prices are only 16 percent away and new record prices seem to be inevitable in the next months.

Although EUAs rose by more than 140 percent in 2021, the number should be put into perspective in relation to other markets in European energy complex. Gas and power experienced gain of more than 500 percent, coal more than 100 percent, while Brent gained roughly 50 percent. The main driver of last year’s run was gas, which disrupted the market with tight supply. Storages have been and still are relatively empty, pipeline imports from Russia are low and liquified natural gas has not been shipped in quantities large enough. For the better part of 2021 EUAs have been highly correlated to gas and power. EUA to German power and EUA to gas correlations at the end of 2021 were above 0.8, when German power to gas correlation was above 0.95, respectively. Markets tended to move in parallel, until major liquidity spike in early October. Despite heavily increased volatility, record breaking days happened latter in the year. Largest single daily loss of 13.55 percent was followed by largest single daily gain of 8.32 percent the next trading day. Both moves happened on moderate volume just a few days before yearly futures expiry. Large trading ranges accompanied by low liquidity were common and moves were mainly one-sided. The busiest trading day happened on May 19, when 80 million allowances changed hand on ICE on December-21 contract. Out of 259 trading days, 155 were green, while on other days EUAs declined in value. Price gained 2% on an average up day, and, equally, lost 2% on an average down day. 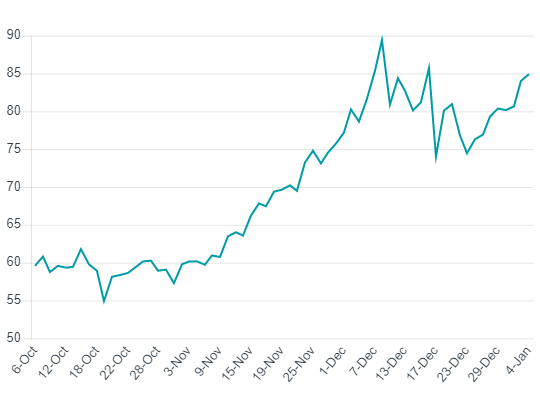