Volatile markets have been a norm for the past few weeks, as tensions between Russia and Ukraine reached near boiling point. Markets in European energy complex reacted in fear of potential war and disruption of energy supply. While power, gas and coal started the week above Friday’s close, EUAs fell. Uncertainty might have caused many market participants to reduce their exposure, similarly to other global markets. Carbon bounced back on Tuesday and rose along with other markets in complex, as Russia moved closer to sending military forces to Ukraine. As Russian parliament voted to recognise the independence of Lugansk and Donetsk, the eastern region in Ukraine, Germany responded with political sanction and halted work to approve Nord Stream 2 pipeline. The latter has been, by most optimistic forecasts, expected to be in use by early autumn this year, however it might be reasonable to expect additional delays. Auctions in the past week have been mostly clearing above prevailing spot market and have been well covered. This has usually been a sign of strong market and bullish bias short-term. Today EUAs rose by more than 5 EUR from low to high, in more or less a straight line. Such moves might indicate fear in the markets, especially with current sentiment and compliance period just around the corner. As we near all-time high prices, we could see even lesser liquidity and faster price movement. 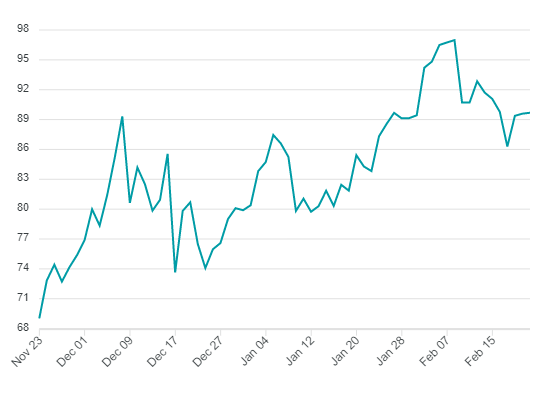