Carbon emission allowances have yet again traded below 80 EUR, the lowest since late May. Many market participants started reducing long exposure by the end of last week, due to resumed auctions and potential new regulations. This caused more than 10 percent sell-off in EUAs, counting from last week high to today’s low. The main focus recently, however, has been plenary vote regarding the Fit For 55 programme, Social Fund and CBAM. At first politicians have also reached a common ground regarding additional MSR sales and rejected the proposal. However, a few moments later a right for reconsideration was requested, which resulted in cancelled vote of amendment referred to MSR. The proposal has been sent back to ENVI and it may take a few months until next plenary vote about EU ETS, causing potential uncertainty in coming summer. This led to surge in EUAs daily trading activity, with volumes well above average in comparison to last fortnight, as well as surge in volatility. Some of the market moves seen today might have been also caused or amplified by nearing of quarterly option expiry. Despite lower prices, two auctions this week have been well covered and in line with prevailing spot market, which might indicate a stable demand for EUAs in current political and economic environment. 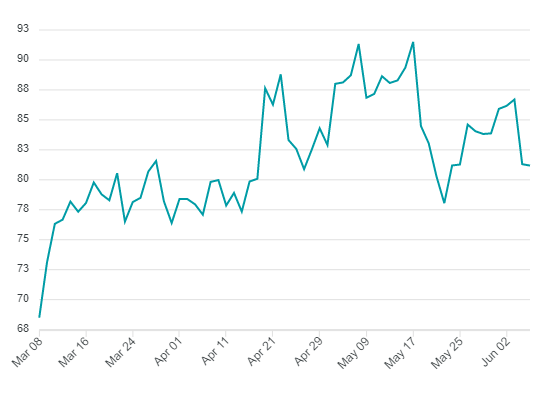