Recent trading activity has been in line with market dynamics that have been persisting for several weeks already. EUAs are still range bound between 70 and 80 EUR. Market is changing direction fast. Auctions in the past week were relatively weak, however, first one this week indicated that buying interest is increasing. Monday’s auction was followed by two more that cleared at premium to secondary market, which could have confirmed there is demand at current price levels. Consequently, EUAs soared minutes after today’s result has been published and traded as high as 76.50 EUR for December-22 futures contract. Even though a move of more than 3 percent happened in less than two hours, prices remain well below monthly high, at 80.59 EUR. At current market state short-term and even mid-term indications might be interpreted as bullish, especially due to colder weather mass coming from North-East, possibility of decreased Russian gas flows via Ukraine and increased demand for power. However, the current up-move could soon be affected by regulatory news regarding RePowerEU and the pace of frontloading EUAs on auctions and could, in most bearish scenario, cause some selling pressure near term. Gas prices have backed down considerably since peaking above 300 EUR three months ago. TTF monthly contract has now stabilized around 120 EUR. This week the European Commission has proposed a gas price cap at 275 EUR for TTF, while warning that this would be used as a mechanism of last resort and would only be activated on monthly contracts traded on the exchange. Because of difficult supervision, OTC trades will not be monitored as well as spot and day ahead products. The trigger would only come into effect after 2 weeks of persistently high prices. 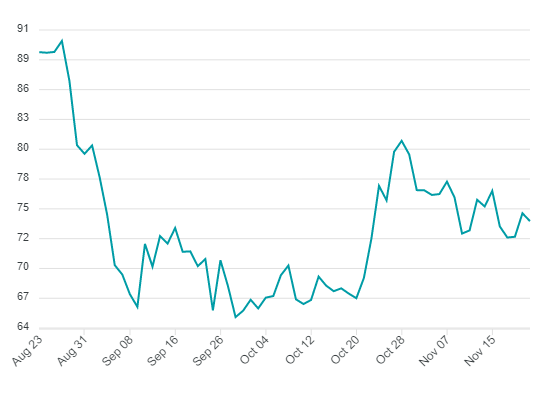