Emission allowances remain strong and well supported above 85 EUR, just a few trading days before yearly option expiry. Buyers might have been mostly lifting the market due to fundamental reasons, such as increased energy demand and cold air mass that has spilled over the central Europe. Lack of wind power generation is currently very prevalent, and utilities have no choice but to produce power from fossil fuels, coal and gas. This has translated into heavy and consistent buying in EUAs, which consequently resulted in more than 15 percent gain in only two weeks. Despite clear bullish momentum, EUAs did find some resistance above 88 EUR, which could be due to option hedging or some profit taking. Interest on daily auctions has been consistent and high, however today’s Polish auction offered unusually large discount below secondary market of more than 1 EUR. Consequently, market sold off aggressively in first half an hour after the result, before finding support at 86.10 EUR. A strong bullish trend occurred in UK emission allowances as well, similarly to EUA. UKAs were trading relatively calm in a narrow range at 70 GBP per tonne, until they took off after auction last Wednesday, despite relatively modest result. Currently they are trading near 80 GBP again, likely due to supporting fundamentals. 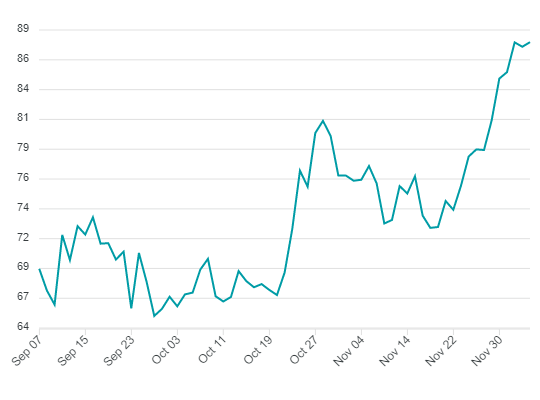