With resumption of daily auctions and therefore primary supply, contrary to logic, EUAs experienced a surge in prices. First auction of the year cleared with a 4-cent premium above secondary market. This sparked heavy buying which lasted until end of the day. Many are suggesting market traded higher due to short covering, as EUAs fell by around 15 EUR since late December. Return of auctions also brought healthier trading volumes, about 15 million EUAs for benchmark December-23 futures contract. Volumes are still lower than in December 2022, however they are picking up consistently. Current longer term bearish bias could be justified by unusually warm winter, good power generation from renewables, still relatively full gas storages and below average gas demand. Despite that, prices below 80 EUR have attracted many buyers, suggesting EUAs could experience some rallies in a downtrend. Long term technical indicators are also suggesting bearish outlook for EUA, with both 50 and 200 – day moving averages above current market price. Similar market moves to EUA could be observed in UKAs as well. The later have been in long-term downtrend since late August 2022, with relatively low trading volumes. Gas storages in UK are near 100 percent full, however the sheer capacity of their storages is only about 10 TWh, roughly 1 percent of the whole EU, making UK gas market more sensitive spot price movements. 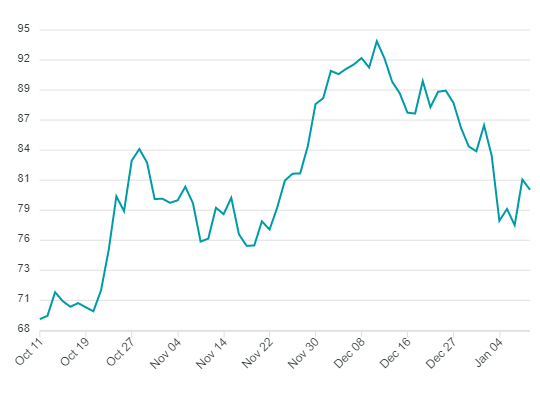