Rolling twenty-day average trading volumes have been declining since beginning of March, indicating potential lack of institutional market participants and broader indecision in the market. Attempts to push and keep prices above 80 EUR have been short-lived. Lack of liquidity is still present and even relatively small trading volume can cause significant price movement. EUAs moved on light trading volume even after President Putin said that ceasefire talks with Ukraine reached “dead end”. On the other hand, other markets in European energy complex rose on the same news. Sentiment in EUAs might be slightly negative, similarly to stock indices, bonds and euro currency. Even though size of speculative positions in emission allowances, according to ICE report, decreased heavily after dip to 55 EUR, market still behaves as a risk-on or risk-off asset. Even though market is not particularly bullish, there has been a lot of buying interest on auctions, evident by clearing results above secondary market. Number of submitted bids has always exceeded auction sales by two-fold in April, while it was lower than that 6 times in March. February was much worse in regards to cover ratios as it only rose above 2 on one occasion. Even that one could be considered an outlier as the auction was one of the two this year from North Ireland with only 1.1 million EUAs offered, half the normal EU size. Rising power and gas prices would suggest challenging times ahead, for industrials and households. Inflationary macroeconomic environment is another issue central banks have to deal with. They only have a few tools to fight against rising prices, most impactful being decreasing balance sheets and increasing interest rates. Unpromising macroeconomic environment, due to rising interest rates in the US and elsewhere, as well as expectations of interest rate hikes in EU, has caused most common investment vehicles to sell-off in the past weeks. 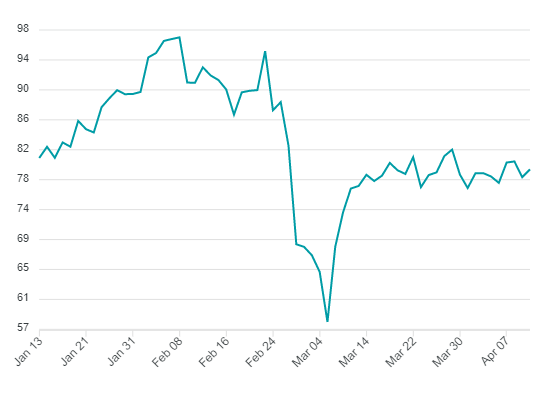