The EUA Dec17 had a calm start to the week moving in the narrowest range of more than one week. The contract opened in line with previous Friday’s close and was slightly up to 7.38 euro. Then it turned lower before the auction, but the former local high near 7.20 euro (also a Marubozu line) halted the decline. In the afternoon, the price climbed higher step by step to reach a daily maximum at 7.45 euro. By the end of the day the price slipped back lower, but was still able to close the day with a gain of 0.5%.

On Tuesday, the EUA Dec17 moved in a range of 20 cents. After opening at 7.34 euro, the price climbed higher. The increase accelerated after the strong auction and the price reached a daily maximum at 7.54 euro. The traded range narrowed late in the afternoon, but the benchmark carbon contract kept some of the daily gains to finish 0.8% higher at 7.42 euro. This was the highest closing price since 8 January 2016.

Then the EUA Dec17 hit a new 2017 high at 7.83 euro on Wednesday. The price opened flat and after some hesitation it turned higher to approach the previous 2017 maximum at 7.72 euro. In the afternoon, the price had a siesta just below this level to regain its strength and continue rallying in the last hours of trading when the new local maximum was reached. The price kept its gains until the market closed and finished the day at 7.81 euro, a gain of 5.3% in a daily comparison. 19 million allowances changed hands in the benchmark contract compared to the 8-11 million on Monday and Tuesday. The rally lifted the price close to 8 euro, where the next resistance is waiting (at 8.04 a local maximum). On the other hand the rally pulled the RSI above 70 (meaning that the price is overbought) and the price above the upper Bollinger band (also a warning signal).

The day after the approval of the Brexit amendment, the EUA Dec17 opened with a 4 cents gap up and hit a new 2017 high at 8.05 euro. The gains however were short lived and the price declined step by step in the rest of the day. The lowest price traded was 7.60 euro. The settlement price was just 5 cents higher, representing a loss of 2.0%.

On Friday, European carbon continued to slide from Thursday’s 21 month high following bearish movements in the corresponding front year German power. After a brief test of 7.80 on the upside in the opening hour, prices fell to their lowest for the day at 7.45 shortly after the German auction. Prices then breached 7.60 euro twice before settling just below at 7.57 euro, 8 cents lower from the previous session.

On Thursday, policy makers will discuss amendments to the Effort Sharing Regulation about emission reductions in sectors not in the EU ETS. (Trilogue)

Also on Thursday, the European Central Bank has a rate setting meeting and a press conference. No changes in the current rates is expected, but during the press event President Draghi might announce cuts to the bond purchase program.

In the lack of any major political events the carbon market might take direction from the energy mix. If the front year German power consolidates near to 36 euro, the EUA Dec17 is also expected to stay in the 7.20-7.85 euro range. Although the increasing trend is unhurt, the mostly watched technical indicators do not provide any special signal. 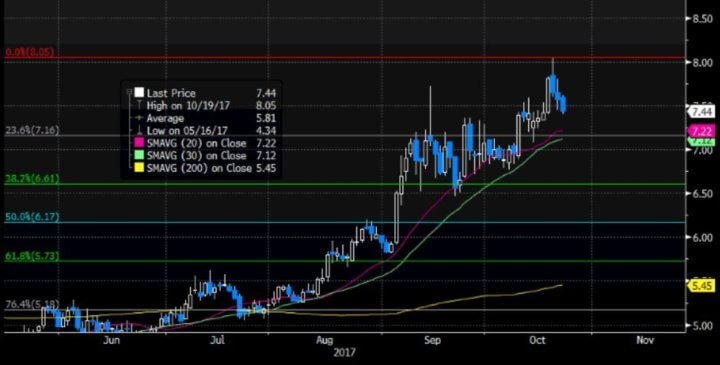