Vertis – The benchmark carbon contract hit 13.04 euro last Thursday and finished the week with a gain of 13%. Technical indicators show that the price is heavily overbought, but the chart does not show signs of a trend reversal.

The EUA Dec18 had a weak start to the week. It opened with a 3 cents gap down and after hitting briefly a daily maximum at 11.23 euro, it declined continuously in the morning to hit 10.89 euro. The strong auction and compliance buyers helped the price in recovering in the afternoon and it closed at 11.06 euro, a loss of 1% from last Friday’s settlement. The traded volume of 16.4 million in the benchmark contract was in line with the March average and above Friday’s 14 million.

After opening with a 3 cents gap up on Tuesday, the benchmark carbon contract slipped shortly to a daily minimum at 10.97 euro, but it recovered after the strong auction and reached 11.57 euro. Keeping almost all the gains, the price settled at 11.55 euro (+4.4%).

The front year carbon contract remained unstoppable on Wednesday too. It only hesitated in the morning it jumped to 12.73 euro (and intraday range of 1.27 euro) and finished the day at 12.65 euro, a gain of 9.5%. The traded volume of 43.5 million was more than the double of the March average.

The EUA Dec18 had a strong start to the day on Thursday as it opened with a 4 cents gap up. After hitting 13.04 euro, a level last seen in 2011, the price turned lower and fell back to a daily minimum at 12.27 euro. The price recovered slightly by the end of the day and closed at 12.34 euro, a loss of 2.5% from Wednesday’s settlement. The traded volume of 34.5 million remained below Wednesday’s 43.5 million, but it was still above the March average of 20.1 million.

Despite the negative global market mood Friday morning, after the US President signed the Decree about the import taxes and risking a trade war with China, the carbon market remained stable. Although the price opened with a 7 cents gap down and the auction was weak, the price recovered and finished the day with a gain of 27 cents (+2.2%).

25% lower auction volume (as there won’t be any EUA auction on behalf of Germany on Good Friday) and compliance buying will support the carbon price this week. The improving dark spread is also helping the carbon price in climbing higher.

In the last two trading days of the last week the price moved rather sideways as collecting power for another jump. Should the price increase further, it could retest the 2018 high at 13.04 euro hit last week, a local high from 2011 at 13.40 euro and the Fibonacci level at 14.35 euro.

In the case of a correction, the first support is seen at the mid-line of last Thursday’s candle at 12.11 euro, followed by a Fibonacci level at 11.61 euro. 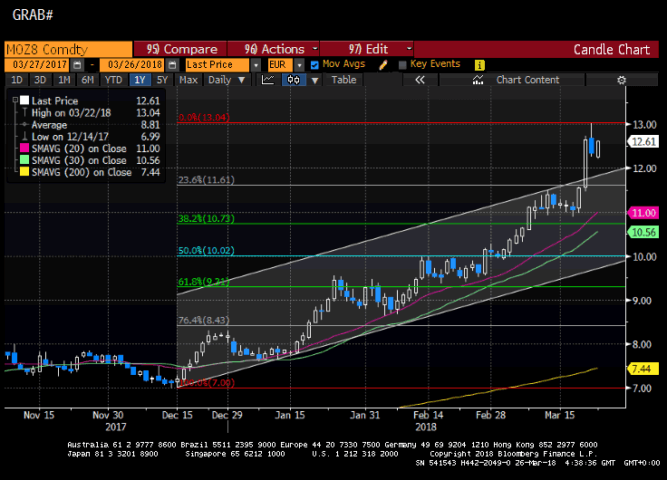