The carbon market had a weak start to the week. Although the price opened in line with previous Friday’s settlement level at 9.81 euro, it was not able to climb any higher and plummeted sharply in the morning hours already to hit a daily minimum at 9.52 euro. The price consolidated in the second half of the day, but was not able to recover and closed at 9.63 euro, a loss of 18 cents or 1.8%.

Market participants celebrating the final approval of the ETS reforms by the European member states lifted the EUA Dec18 above 10 euro on Tuesday. The benchmark contract opened flat in the morning and moved in a narrow range around 9.60 euro until the vote took place. After the positive outcome of the vote the price was unstoppable and increased the whole day long to hit a new local high at 10.18 euro. The contract kept its gains until the last minutes of trading and finished at 10.15 euro, the highest settlement price in almost six years (+5.4% d/d). The traded volume of 23.5 million allowances was decent. By the end of the day, the price produced a huge white candle and a bullish engulfing.

After hitting 10.29 euro early in the morning, a new six year high, the EUA Dec18 turned lower on Wednesday and closed the day with a loss of 5 cents (-0.5% d/d). Some market participants might have taken the profit from the recent rally and the carbon market did not receive support from the power prices either. The traded volume of 16 million allowances remained well below Tuesday’s 23.5 million. The price left a doji candle indicating hesitation of the market participants about which direction to take.

The EUA Dec18 consolidated near the 10 euro level on Thursday. After opening at 10.05 euro (a 5 cents gap down), it increased to 10.12 euro in the first 10 minutes of trading. In the morning the price slipped then continuously to hit a daily minimum at 9.94 euro. The rest of the day was spent with oscillating around 10 euro. The price settled at 9.99 euro, a loss of 11 cents (-1.1% d/d). The traded volume declined further to 13.3 million.

The support level at 9.90 euro kept the price Friday morning from falling and when buyers realized that the price would not go any lower, they started purchasing allowances and lifted the price above 10 euro again. The price remained close to its daily maximum at 10.16 euro and finished with a gain of 1.5%.

With the compliance deadline approaching, we expect the price to consolidate near the 10 euro level. 9.56 euro is our first strong support, although the 9.90 euro level kept the price from falling in the last three trading days. To the upside, last week’s maximum at 10.29 euro is followed by the upper Bollinger band at 10.31 euro and a local maximum from the past at 10.84 euro. 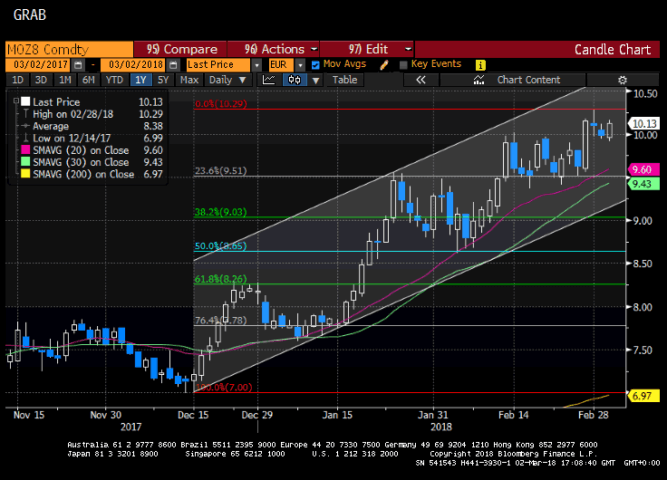