Vertis – The EUA Dec18 experienced its biggest weekly drop since December. The benchmark contract lost 2% in a weekly comparison as demand for allowances was low in the first days of the week, after the Easter holidays.

After the Easter holidays, the EUA Dec18 opened with a marginal gap down at 13.25 euro. The weak auction result pushed the price lower to a daily minimum at 12.51 euro. Before the publication of the 2017 verified emissions, the price started recovering and as emissions showed an increase from 2016, the price started rising in the afternoon and hit an intraday maximum at 13.34 euro. The contract remained close to the upper edge of the daily range and settled at 13.30 euro, a marginal gain of two cents (+0.2%).

On Wednesday, the EUA Dec18 lost 1.8% as the auction on behalf of the UK cleared at a 7 cents discount and the demand for allowances decreased. The benchmark contract opened in line with Tuesday’s settlement, and hit a daily maximum at 13.59 euro as the momentum from the higher 2017 emissions prevailed. The weak auction result, however, pushed the price to an intraday minimum of 12.84 euro. The price slowly recovered in the afternoon and closed above the 13 euro mark. The traded volume of 17.6 million was lower than Tuesday’s 18.8 million and significantly below last week’s daily average of 31.9 million.

In two waves during the day, the EUA Dec18 lost 3.2% on Thursday. The price lost 30 cents in the first hour of trading to consolidate between 12.70 and 12.80 euro around noon time. In the afternoon, the price was still able to hit a local maximum at 12.94, but it was not able to climb back to the morning levels. The afternoon sell-off pushed the price to a daily minimum at 12.58 euro. The price settled at 12.64 euro, a loss of 42 cents or 3.2%. The traded volume of 26.6 million was higher than that of the previous two trading days.

Renewed fears about the US-China trade war put financial markets under pressure on Friday and the carbon market was no exemption. Although the price opened with a 3 cents gap up from Thursday’s settlement, it fell to an intraday minimum of 12.53 euro. The surprisingly strong auction however reversed the price direction and lifted the price to an intraday high at 13.22 euro. By the end of the day, the price returned to the 13 euro level, but still managed to close with a gain of 2.8%.

As the carbon market receives mixed signals that keep the price of allowances near the 13 euro level.

Increasing emissions (if the trend of 2017 continues), approaching deadline for compliance have a positive effect on the price. The benchmark carbon contract was not able to retest the 2018 high last week. The weekly maximum at 13.59 euro might be therefore the first resistance before the 14.17 level. (The upper Bollinger band is at 14.11 euro.)

The significant auction volume (two of this week’s auctions offer more than 5 million allowances due to the cancelled auction before Easter) and the strong USD that deteriorates the profitability of coal fired power plants, do not let the price to hit a new 2018 high. Should the price decline further, it could retest the Fibonacci retracement at 12.62 euro (also close to last week’s minimum). After this level, the 20DMA at 12.28 euro could provide the next support. 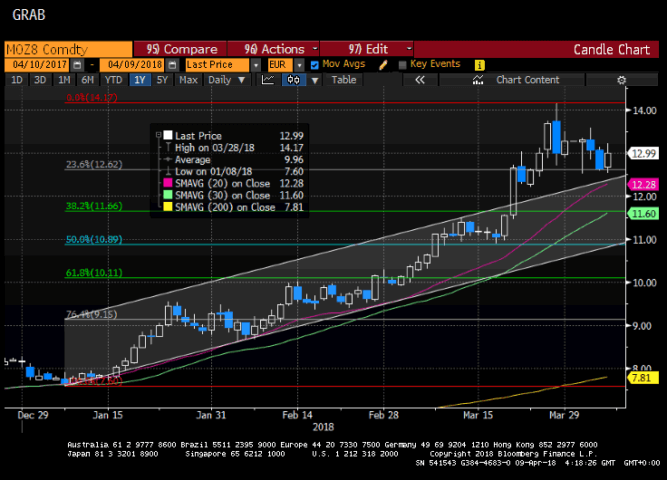