EUA Dec18: Sharp losses in the second half of last week

Vertis – Due to lower compliance demand, the EUA Dec18 lost 6.4% last week. The price was still able to hit a new local high at 14.22 euro on Monday, but it turned sharply lower in the last two trading days.

Despite some hiccups in the morning, the EUA Dec18 closed a positive day last Monday. It opened at a 4 cents discount to the secondary market and fell to a daily lo at 13.77 euro in the first hour of trading. Higher power prices and the strong auction result lifted the benchmark carbon contract a new 2018 high at 14.22 euro. The price settled at 14.00 euro, a gain of 0.4% and the highest settlement price for almost seven years.

After hitting a new 2018 high on Monday, the EUA Dec18 took a break and lost 1.9% as traders took profit. The price opened 4 cents below Monday’s settlement price and reached a daily maximum at 14.06 euro only. Later during the day the price got under selling pressure from profit taking traders, low power prices and deteriorating profitability of fossil-fuelled power plants.

Supported by higher gas and power prices, the EUA Dec18 gained 1.1% on Wednesday. After a positive start when the price hit 13.89 euro, the weak auction result pushed the benchmark contract lower to a daily low at 13.59 euro. From here, the price recovered step by step to hit a new daily high at 13.92 euro and to settle at 13.89 euro. The traded volume of 20.3 million is in line with the April average.

On Thursday, the price had a quiet start to the day and moved in a range of 30 cents. The strong auction result helped the price in hitting a daily high at 14.08 euro. In the last hour of trading however sellers invaded the market and pushed the price to Wednesday’s low at 13.59 euro and when the price fell below this support level, stop loss orders triggered pushed the price to an intra-day minimum at 13.23 euro. The price settled at 13.46 euro, down by 43 cents or 3.1%. Due to the automatically triggered orders, the traded volume increased to 53 million from Wednesday’s 20.3 million. The two last candles formed a bearish engulfing suggesting that the price might retest further support levels.

And the technical signal proved to be right on Friday when the price fell below 13 euro hitting 12.67 euro during the day. This level coincided with the 30DMA that proved a good support and reversed the price to 13.05 euro by the end of the day (-41 cents or -3.0% d/d).

This is the last full week before the compliance deadline on 30 April. In addition, auction volume will be 4.8% lower than last week. These to fundamental factors might support the carbon market this week. From the technical analysis point of view, the price found a support on the 30DMA at 12.64 euro on Friday, which might halt further declines. Should the price reverse, it could retest the 20DMA at 13.28 euro.

On the other hand, there might be not many compliance purchases left for the last week of April. Low demand and the outlook of mild weather in Europe will weigh on the price. Should the price decline further, the first support it has to face is the 30DMA at 12.64 euro, followed by a local low at 12.21 euro and a Fibonacci level at 11.69 euro. Interestingly, even by falling to the latter resistance, the increasing trend channel that started in January 2018 would be still valid. 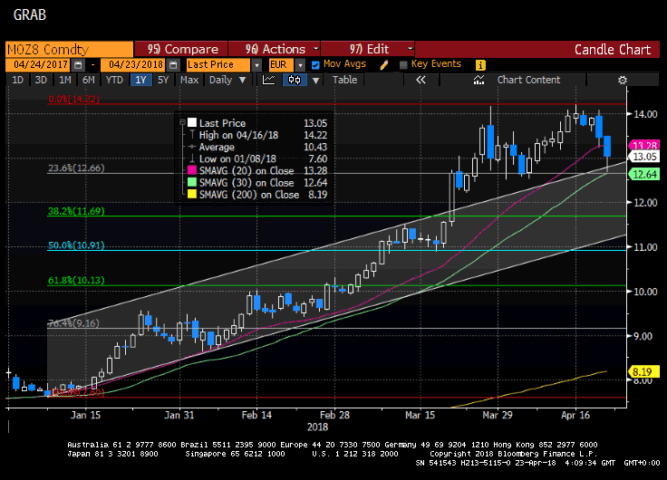