After consistent three-week rally from 50 EUR, EUAs have found a new base above 56 EUR. Strong buying pressure, along with bullish trend in major energy markets, has pushed the prices to the highest levels since early July. Auctions have mostly been clearing at or above the secondary market price which is understandable due to halved volume. In the past days, major investment bank analysts have published long term price forecasts – raising previously established target prices. One of the main reasons for increased targets is continuously tightening system, which could lead to structural shortage of allowances in the following years. They also expect EUAs to average more than 10 percent gains per year, leading to eventually surpass 100 EUR mark at the end of the decade. For now, the nearest benchmark sits at 60 EUR – a strong psychological level, which might be reached if European energy complex remains up trending. Another factor pointing to further EUA rise lies in gas to coal switching. As gas prices keep on climbing viciously, coal fired power plants are becoming more lucrative alternative especially in the front-month prices. Coal almost doubles CO2 output compared to gas which could be bullish for EUA if this trend persists through the summer. 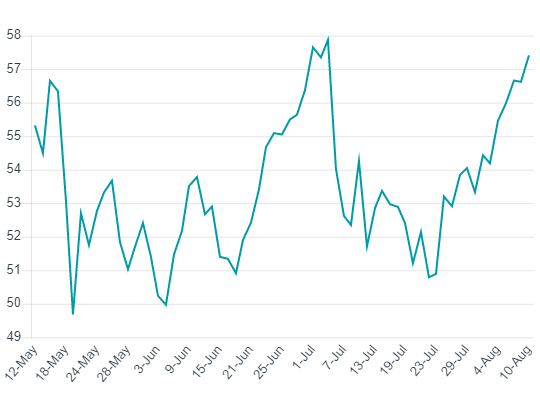