Vertis –  The EUA Dec18 extended gains last week as the compliance deadline is approaching. The benchmark carbon contract gained 7% in a weekly comparison. Traded volume also increased by more than 30%. The carbon price received strong support from German front year power that jumped to a 5-year high. Geopolitical tensions between the US and Russia lifted oil prices by 8%.

The benchmark carbon contract had a weak start to the week. It opened at 12.94 euro on Monday, 5 cents below previous Friday’s settlement price. In the morning, the price hit a daily minimum at 12.86 euro (a weekly low). The contract started recovering before the auction of 5.3 million allowances, and despite the weak auction result, the recovery continued and the price hit an intraday high at 13.42 euro in the afternoon. The benchmark carbon contract settled at 13.33 euro, a gain of 2.6%. The traded volume of 17.9 million remained below Friday’s 20.8 million.

As financial markets cheered about the speech of the Chinese President, the carbon price had a positive start to the day on Tuesday. Buyers lifted the price to 13.40 euro, where the price consolidated in the afternoon. The EUA Dec18 settled at 13.38 euro, a gain of 4 cents (+0.4%).

The EUA Dec18 moved in a range of 35 cents on Wednesday. After opening 2 cents below Tuesday’s settlement price, the benchmark carbon contract plummeted to a daily minimum at 13.24 euro in the first ten minutes of trading. The surprisingly strong auction that cleared at a ten cents premium lifted the price back to an intraday high at 13.59 euro. Some buyers decided to take profit at last week’s maximum and pushed the price down to 13.34 euro. The EUA Dec18 gained 7 cents (+0.5%) in a daily comparison. The traded volume of 34.4 million was the highest of the month.

On Thursday, the EUA Dec18 had a quiet start to the day, but the shockingly weak auction clearing at a 15 cents discount pushed the price to a daily low at 13.17 euro. From this point, the price increased continuously and with a surprising jump in the afternoon it hit 13.82 euro. Although not all the gains could be kept, the benchmark carbon contract still closed 15 cents above Wednesday’s settlement price (+1.2%).

The spike on Thursday opened the space for retesting the 14 euro level on Friday. Another weak auction could not stop buyers from lifting the price to 14.08 euro. The price could not retain all its gains and closed the day and the week below 14 euro, but it still gained 2.6% day on day and 7.3% in a weekly comparison.

The first resistance is at 14.17 euro, followed by the upper Bollinger band at 14.46 euro.

The negative German dark spread however might demotivate utilities. Should they remain away from the market, the price might fall back to the 13.20/13.40 euro range that has often proved a good support recently. 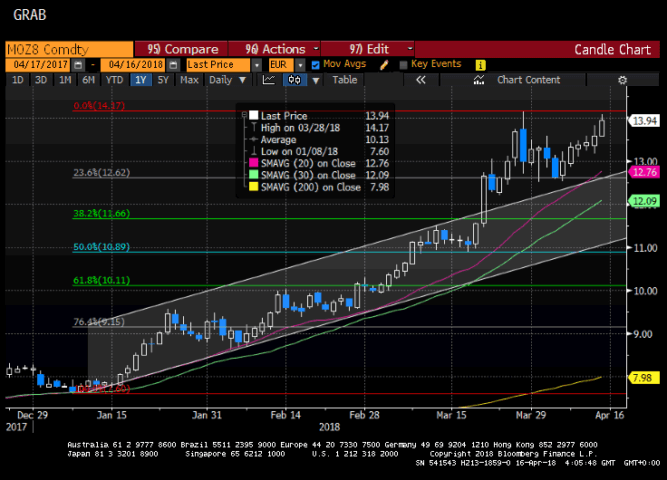