Halved auctions at the beginning of the month have yet again proved to be one of the major factors of pricing EUAs. The market has climbed more than 3 percent in only 3 trading days and continues to be one of the best performing commodities this year. So far none of the auctions in August cleared below spot prices, in fact the opposite happened. Today’s auction cleared at 55 EUR, more than 35 cents premium over secondary market, which drove EUAs higher in the morning hours and peaked at almost 55.50 EUR. The retracements in the past week have been shallow and dips were bought with ease. Trading volume has been moderate to low, typical for the summer. Lower supply of EUAs might be creating an environment for potential strong bullish moves in the near term. Many analysts speculate that price rise was helped by continuous bullish trend in the European energy complex, especially power and gas – the latter being at the highest levels since January 2006. It may seem that push for acceptance above 55 EUR is still in play, however the market might rise even higher if demand remains strong. Most optimistic are even expecting EUAs to reach more than 100 EUR in the following years, before regulatory intervention. Warm weather and heat wave which hit the Balkans in the past weeks and caused many power outages, might create a strong need for emission allowances, especially due to potential poor hydro power outputs and power lines capacities. 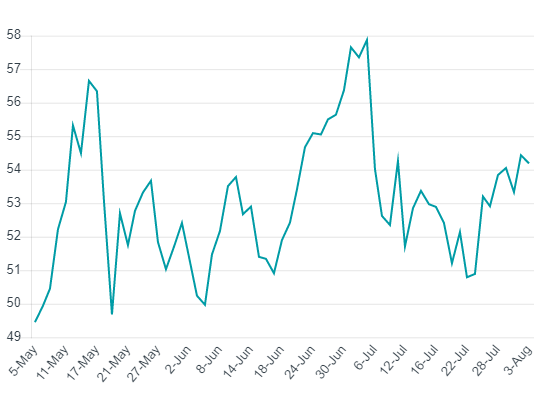