Last week’s selloff has been recovered and EUAs continue to trade above 56 EUR. The market declined most possibly due to unexpected and surprising Nord Stream 2 news, which turned out to be a mistake. Emission allowances have yet again proved to be dependent on major energy markets and upcoming potential changes in the European energy complex. Trading volumes in the past month have been moderate, however the market was less liquid than usually. Even though some of the auctions in the past few days have cleared substantially below the secondary market, the pullbacks have been bought with ease. Price has since returned into previously established range at 56 EUR/EUA and might continue to rise towards 58 EUR level or even higher. Many analysts expect the rise until the end of the year and breaching of 60EUR level. Lower temperatures in Central Europe might have been expected to cause less power demand, however the European power markets have remained strong after correction. The nearing of quarterly option expiry might cause more volatile market in the following weeks and trading towards extremes of the range. Strike prices with the largest open interest (OI) are sitting at 50 EUR with 11 million EUAs and 65EUR with 10,6 million EUAs of OI. 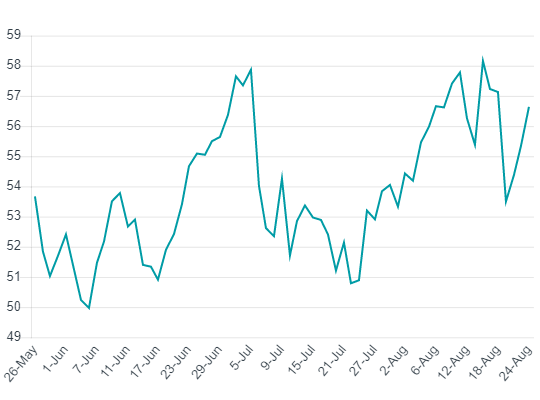