On Monday, the benchmark carbon contract jumped as much as 1.6% to 8.90 euro, the highest since 13 November, 2012. The weak auction result and profit taking from the recent rally, however, pushed the price lower before noon already. The decline accelerated in the afternoon, when the price hit a daily minimum at 8.55 euro, but from here the price climbed back to close at 8.75 euro, a marginal loss of 0.1% and leaving a doji candle.

Tuesday was another bullish day for carbon as the price broke above the 9 euro mark in the last hour of trading, although the carbon market did not receive any support from energy fundamentals. The benchmark contract settled at 9.01 euro, 2.9% above the previous close.

Wednesday was the most spectacular day of the week with carbon climbing another 0.55 euro to hit 9.56 euro, a new five-year high. The lack of a daily auction supported the carbon price. In addition, after breaking several resistance levels, traders holding short positions were „squeezed out”.

After nine white candles in a row, the EUA Dec18 produced its first black candle on Thursday as an increasing number of market participants expected a correction after the recent rally. The contract opened in line with Wednesday’s settlement, and hit a daily maximum at 9.54 euro. Wednesday’s maximum at 9.56 euro however could not be reached. The price got under selling pressure in the afternoon and fell to 9.09 euro, but was lifted back in the last hours of trading to close at 9.24 euro, a loss of 22 cents.

The price opened flat on Friday, but fell below 9.10 euro in the morning as market participants expected a weak auction result. After the auction, the price stabilised, but a second wave of sellers arrived in the afternoon and pushed the price to a daily minimum at 8.97 euro. The benchmark contract finished the day with a loss of 15 cents (-1.6%).

Energy fundamentals did not support the carbon market last week, as the German dark spread (an indicator to show the profitability of coal fired power plants) turned negative.

The decline of the last two trading days pushed the price back into the increasing trend channel and the relative strength index from overbought into neutral territory (69) again.

As the fundamentals and the political agenda do not provide any clear signal for the carbon market, the price could get under pressure from the higher supply, especially as member states start distributing free allowances for 2018 in February. We therefore expect the EUA Dec18 to move between 8.50 and 9.50 euro this week. 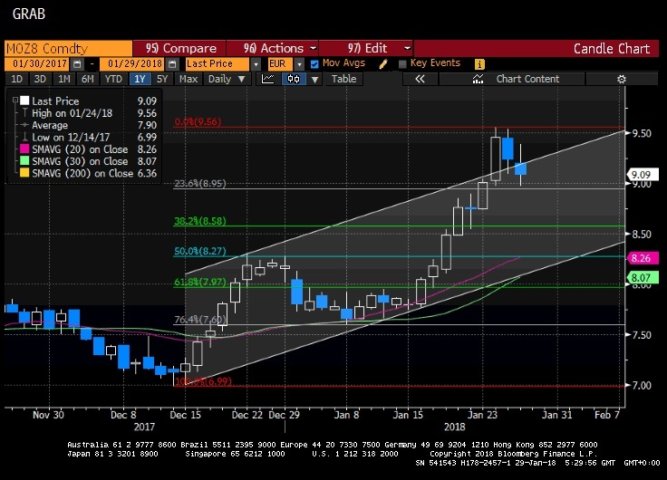