EUAs have been on a steady rise since last Wednesday. Prices have moved up from the biggest options open interest at the level of 80 EUR, which holds around 22.5 million EUAs. Above that level there are big call positions, predominantly at 100 and 110 EUR levels which add up to around 30 million EUAs. Above those strikes there is over 30 million EUAs of additional open interest combined up to 200 EUR level. Currently we are nearing the 90 EUR level which also holds around 12.5 million EUAs of open interest and may act as a magnet in the next weeks. With Russian gas flows to EU decreasing and shortage concerns growing, power prices have been on a steady rise as well. EU countries are preparing plans to phase out energy dependence on Russia and Central Eastern task force is being established to help tackle the Russian gas problem. Other region task forces are supposed to follow. Plan is to fill up EU gas storage to at least 80% by November, while storages are currently filled up a bit over 50%, which is around average for summer time. However, prices on the market suggest that the problem might not be easily solved. As long as the gas flows are interrupted, markets are unlikely to move lower. 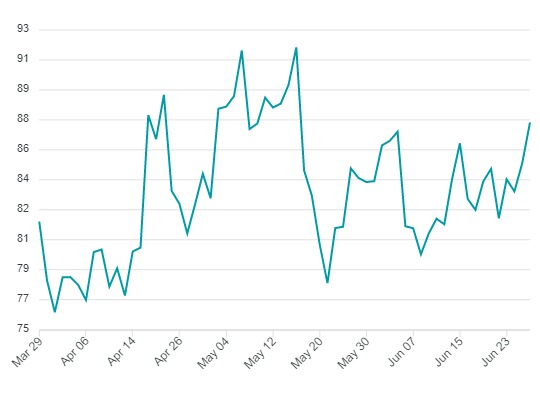