Vertis – Although the EUA Dec18 retreated after hitting a new six year high at 10.02 euro on Wednesday, it kept part of the gains and finished 3.1% higher than the previous week.

The EUA Dec18 started the week with a 6 cents gap down. The price slid continuously to a daily minimum at 9.08 euro in the morning. The strong auction result, however, lifted the price by more than 10 cents. The price increased in the afternoon to a daily maximum at 9.50 euro, a level not seen since 25 January. The benchmark contract settled at 9.48 euro, a gain of 25 cents (+2.7%).

The benchmark contract was unstoppable on Tuesday. The strong auction, increasing power prices and compliance buyers helped the price in forming the fifth white candle that is even bigger than any of the previous four. After some hesitation in the morning, the price increased continuously breaking above the previous local high at 9.56 euro and the upper Bollinger band at 9.67 euro. After hitting 9.98 euro, the benchmark contract settled at 9.90 euro, a gain of 42 cents (+4.4%). The rally lifted the MACD above the signal curve.

On Wednesday, the EUA Dec18 moved in a range of 48 cents and was able to reach 10 euro in the morning, for the first time since November 2011. Around noon time, however, the price got under pressure and fell to a daily minimum at 9.54 euro. The price closed at 9.60 euro, 30 cent or 3.0% below Tuesday’s settlement.

The European carbon price took a break on Thursday after hitting a new six-year maximum earlier during the week. The EUA Dec18 opened one cent above Wednesday’s settlement price and climbed to a daily maximum of 9.72 in the morning. In the afternoon, however, sellers pushed the market down to 9.50 euro and the benchmark contract was not able to recover by the end of the day. The EUA Dec18 finished the day at 9.54 euro, a loss of 0.6%. The traded volume remained close to 10 million, compared to the 20-30 million of the two previous days.

On Friday, the price consolidated around 9.50 euro. After opening with a five cents gap up, the price increased to 9.69 euro, the levels from which it started declining the previous day. Sellers pushed the price down in the afternoon to a daily minimum at 9.37 euro. In the last hour of trading buyers lifted the price back and it finished with a marginal loss of 0.2%.

Different factors affecting the carbon market this week, are expected to keep the price in balance.

According to market sources, some European member states (France, Poland, Belgium, Portugal and Hungary) started the distribution of the 2018 free allocation. The process is expected to continue this week, denting the appetite for allowances by the cash-strapped companies.

In the last two weeks, market also saw an increased activity in the CER market. Spot CERs were especially popular. This might be a sign that companies use their (remaining) linking capacity and exchange the cheap CERs for EUAs, also a negative factor for the EU allowances.

Energy fundamentals, on the other hand, might provide a support to the carbon market, if the price of German power continues rising and the German dark spread improves further. 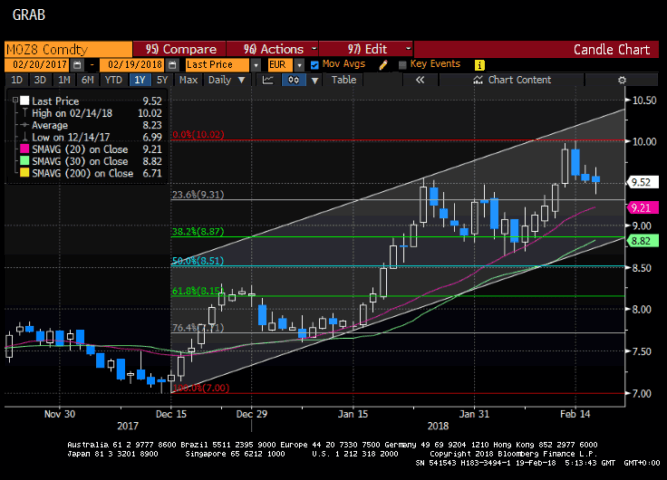