In the first half of the week, the carbon market received strong support from compliance buyers, speculators and utilities profiting from higher power prices. On Wednesday and Thursday, some long positions were closed and interest in the allowances vanished before the holidays.

With stock futures and Brent in the red in the morning, the EUA Dec18 had a weak start to the week. It opened with a two cents gap down from previous Friday’s settlement and hit a daily minimum at 12.45 euro. It recovered from here as the strong auction gave wings to the benchmark carbon contract that hit a new six year high at 13.11 euro. The price then consolidated in the afternoon near 13 euro. It settled just one cent below this level, gaining 3%.

The EUA Dec18 started Tuesday with a 9 cent gap up. A short hesitation pushed the price to a daily minimum at 12.87 euro, but the price recovered quickly and jumped to an almost seven-year high at 13.74 euro. Keeping almost all the gains, the benchmark carbon contract closed at 13.68 euro, 5.3% above Monday’s settlement price. The rally lifted the RSI and the MACD higher. Both indicators showed that the price is overbought.

After opening with a 5 cents gap up on Wednesday, the EUA Dec18 hit a new almost seven year high at 14.17 euro. As the price increased by more than 1.50 euro since previous Friday, some traders decided to take profit from the rally. The benchmark carbon contract got under selling pressure in the afternoon and fell to an intraday low at 12.70 euro. It recovered slightly by the end of the day and settled at 12.99 euro, a loss of 5.0% or 69 cents. The traded volume of 41.6 million was the highest of the week and almost reached the volume traded the previous Wednesday, when the price jumped by 9.5%. The relative strength index (RSI) returned to 70. The last two candles formed a bearish engulfing, a signal that the correction might continue.

On Thursday, buyers outpaced sellers again. Although the price was less volatile on the last trading day before the Easter holidays, it increased by 2.2% and closed above 13 euro, despite a cancelled auction.

2017 verified emissions data could increase the volatility in the carbon market this week. Market expects emissions to have increased by 0.5-1.0% last year. If actual data differ significantly from market expectations, the price reaction might be bold. Compliance buyers are expected to support the price further.

If emissions increased more than the market expected and if compliance buyers continue purchasing allowances, the price could increase to the upper Bollinger band at 13.86 euro or even retest the 2018 high at 14.17 euro.

In a negative scenario, last week’s minimum at 12.45 euro that almost coincides with the Fibonacci level at 12.48 euro could be the first strong support. 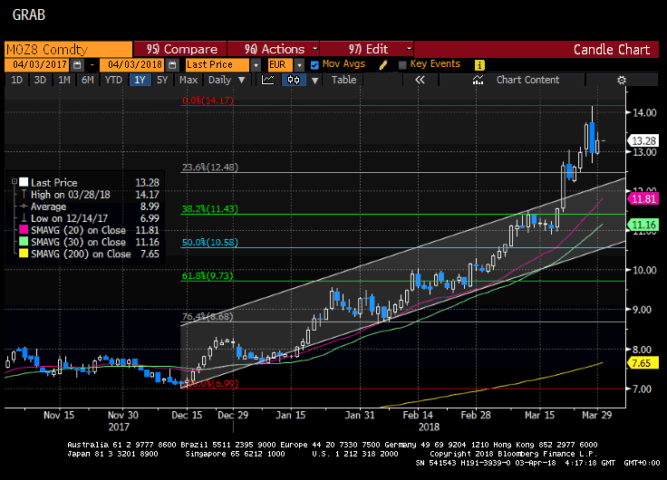