The EUA Dec18 started the new year with a loss of 37 cents or 4.5%. The price opened with a 13 cents gap down, and despite some upward movement in the morning (daily maximum at 8.13 euro), the price fell continuously during the day. First it fell below the 8 euro mark, then it approached the 20 and 30DMAs although it did not retest them.  The contract settled at 7.81 euro.

After two days of losses the EUA Dec18 turned higher on Wednesday and gained 2 cents (+0.3%) on higher power prices. The opening was still gloomy as the price started the day with a 6 cents gap down. The benchmark contract hit a daily minimum at 7.73 euro (Tuesday’s minimum exactly), but started increasing before noon already to hit a daily maximum at 7.97 euro. The traded volume of 8 million remained below Tuesday’s 9.6 million.

On Thursday, the benchmark carbon contract moved in a range of 18 cents. The EUA Dec18 opened with a 6 cents gap up and after some volatility it reached a daily maximum at 7.92 euro. In the afternoon, one red candle followed the other, until the price reached a daily minimum at 7.74 euro (just one cent above the minimum of the two previous days). The price was not able to recover by the end of the day and finished at 7.77 euro, a decline of 6 cents (0.8%) from Wednesday. The traded volume reached 10 million for the first time in 2018.

On the last trading day of the week, the EUA Dec18 moved in a range of 10 cents. The price opened with a 2 cents gap down and hit a daily minimum at 7.74 euro in the morning already. This level has supported the price for four days. During the day, the price climbed several times above 7.80 euro. The benchmark contract finished at 7.78 euro, 1 cents (+0.1%) up from Thursday’s settlement price.

Should mild temperatures and increasing supply weigh on the price in January, the EUA Dec18 could test the 20 and 30DMAs or the December low at 6.99 euro. If the auctions have a strong result, the price is expected to remain close to 8 euro. 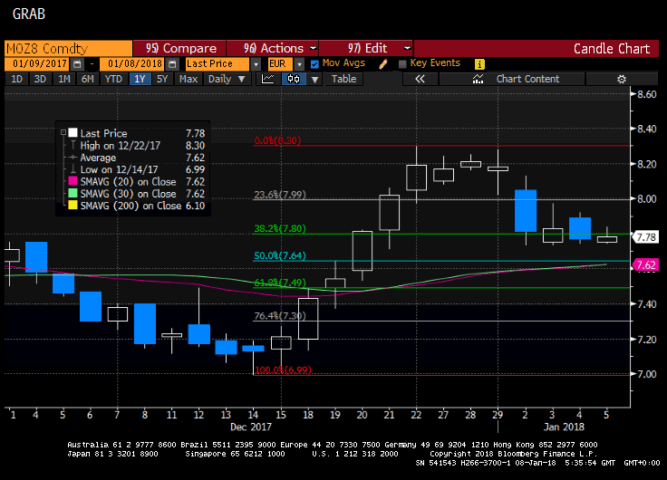