Initial Monday rally in EUAs was followed by persistent selling pressure for the last two trading days. Price reverted just shy of 54 EUR/EUA, near the current monthly high. Fundamental news which has negatively affected the market was Monday’s detailed preliminary free allocation list in Germany. As EU ETS largest emitter, purchases of German installations have had big effect on price development of EUAs. Between 2021-25 free allocations will be higher than expected, at 129 million allowances annually. The handouts will probably start at the end of July, which is almost a month later than the timeline of the European Commission. Historically allowances have been allocated in February, however this year’s allocation has been postponed due to bureaucratic delays. Since the news-driven selloff, price of EUAs rebounded and is currently sitting at 51.50 EUR/EUA. Daily volume in the beginning of June has been steadily declining, which confirms lack of directional buying/selling in comparison to May. As we are nearing option expiry next week, it is expected to see increased volatility in both directions. Price of EUA is still in long term uptrend as 50 and 200 period moving averages continue to increase and provide technical support. With the start of calendar summer and warmer weather in Central Europe, the electricity demand will likely increase, which may have positive effect on EUAs for the next few months. 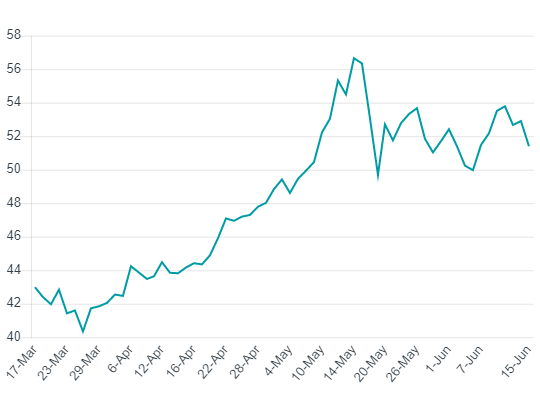