December 2021 EUA futures contract settled at 79.38 EUR this week on Monday, after posting 142 percent gain year-to-date. Steady yearly rise with only a few major corrections had likely been caused by supporting fundamentals, free allocation delays, ever tighter emission policies and participation of financial institutions. EUAs as part of European energy complex, were highly correlated to power and gas for most of the year but could not keep up the pace. Correlations broke early October, after parabolic move in power and gas, the latter being the main driver and best performer. Power generation in the past few months highly relied on Russian imports, especially due to windless summer in Northern and Western Europe. Lower storages in comparison to previous seasons and low imports through existing pipelines have caused even more volatility in the markets at the end of year. Daily auctions in past week have been well covered most of the time and offered a discount below secondary market only on few occasions. Last EUA auction this year cleared at the lowest price in December, at 74.57 EUR, starting a three-week pause period when no auctions will take place. When auctions resume, on January 10, supply offered on auction will be slightly reduced and could cause some bullish pressure in the meantime. Trading volumes in the past week have been healthy and above average, however trades were distributed through large trading ranges. This caused sharp and one-sided moves, usually more than 1 EUR, before market regressed towards the mean. On the other hand, UK emission allowances continue to push higher, even after futures expiry. Dec-22 UKA futures contract has been consolidating at around 78 GBP for a few days, near recent all-time high. Although EUAs and UKAs are not connected or transferable, they usually both react to similar fundamental factors. It seems that carbon might remain well supported, especially during low supply period and record power prices. 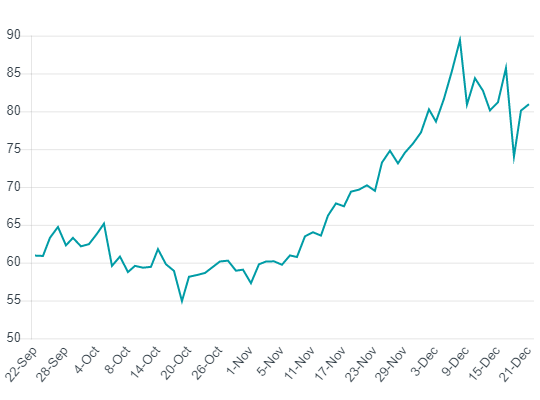