After a week of heavy selling, EUAs might finally be entering a consolidation phase. For the past few days EUAs have been trading between 75 and 80 EUR, down by almost 15 EUR from monthly highs. It seems that market has found equilibrium, since daily trading ranges have narrowed but average trading volumes picked up quite a bit. Dynamics on auctions have shifted a bit as well, since some of them cleared well above secondary market recently. Upcoming halved auctions in August could provide a bullish short-term bias, which might at least support current sideways range. Despite that, EUAs have been an underperformer in comparison to other markets in European energy complex, especially German power and gas. The main reasons might be concerns about inconsistent gas supply, fluctuations of daily nominations and general fear of shortage, which has been very bullish for these two commodities. Quite the opposite has been true for carbon, which has started to be negatively correlated to gas and power again. Upward pressure in gas might help push EUAs below the current range but for now EUA market remains fairly balanced. 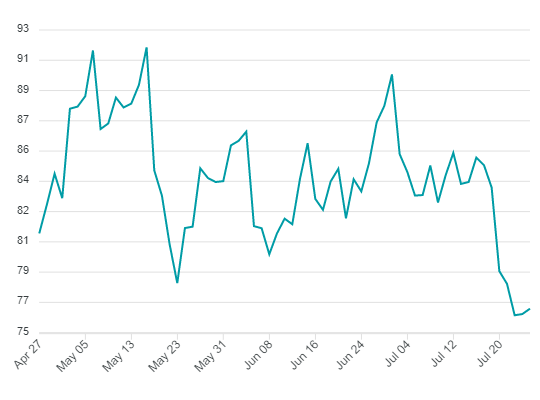