To sum up 2022 with a few words, it would be best described one giant range. Market ended the year almost exactly where it started. This fact alone however cannot describe how eventful 2022 really was. At the beginning of the year market continued to push higher, as auction pause and reduced auction volume in comparison to the year prior strengthened the bullish pressure. Carbon traded higher almost by the day, before reaching what was at the time new record high at 98.49 EUR for Dec-22 futures contract. At the time it almost seemed, that carbon could reach 100 EUR mark relatively quickly, however unfortunate events in Ukraine ended the bullish run in late February 2022. When conflict escalated, EUAs along with other markets in European energy complex, experienced unprecedented levels of volatility, liquidations, and overall panic. Last day in February and first two trading days in March 2022 were the busiest days last year by a great margin, with almost 80 million allowances in trading volume. Such aggressive selling caused EUAs to dip to 55 EUR, before creating a sharp rebound. After that, for the better part of the year EUAs found support at around 70 EUR per tonne, while facing strong selling pressure above 90 EUR. Option activity was at a lower level than a year prior, due to macroeconomic situation and less active participation of financial institutions. Daily auctions will resume in just a few days, with slightly reduced expected volumes relative to 2022. Total consolidated auction volume this year is expected to be just above 479 million allowances, out of which 40 million will be sold to finance Innovation Fund and roughly 67 million to accumulate sufficient funding for Modernisation Fund. EUAs are currently trading at around 80 EUR again, a level visited several times last year and a mean where price mostly reverted to last year. Mild winter, sufficient power generation from renewables, and lower gas prices are currently the main reasons why EUAs drift lower by the day, despite lack of primary supply. Until fundamental reasons remain unchanged, carbon could be continuing lower. Despite that, we cannot forget that we are in season which was historically supportive for carbon prices and market could be sensitive to the upside if conditions return near normality along with colder weather. 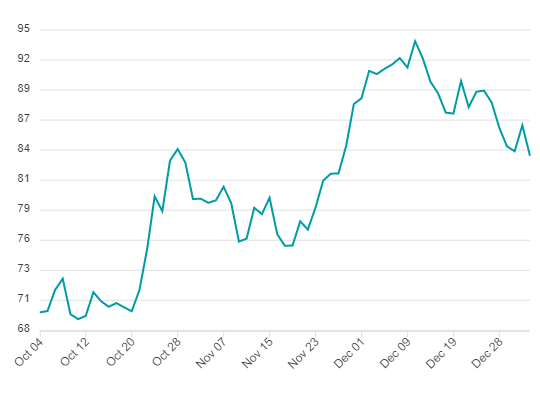