Vertis – With many traders on holidays due to the spring bank holiday, the EUA Dec17 remained stable on the first trading day of the week. The contract traded in a range of 9 cents. Although the price fell to a daily minimum at 5.13 euro, it remained above the 200DMA and was also able to recover to close at 5.17 euro (-0.4% d/d). Despite the loss the 20DMA climbed above the 30DMA on Monday, a positive signal.

The delay of the political negotiations and the restart of the daily auctions pushed down the price of the EUA Dec17 in the first half of the day on Tuesday to hit a daily minimum at 5.09 euro. The recovery in the afternoon was short lived and the contract closed at 5.14 euro, a loss of 3 cents or 0.6% in a daily comparison.

The benchmark carbon contract was relatively stable in Wednesday’s opening, but started to decline slowly after the auction. The movement accelerated in the last hour of trading, when the price fell below the 200DMA and the 5.00 euro level. The price was not able to recover and finished the day at 4.98 euro, a loss of 16 cents or 3.1%.

The EUA Dec17 opened flat on Thursday and increased continuously during the day. The gains accelerated after the strong auction and the price hit a daily maximum at 5.14 euro. By the end of the day the price retreated slightly to close at 5.08 euro, a gain of 10 cents or 2.0%. The fact that the price managed to climb back above 5.00 euro was a positive fact.

Disappointment about the decision of the US President pushed the price of the EUA Dec17 below 5.00 euro  Friday morning again, but the commitment of the climate commissioner and the German Chancellor to the accord brought back investors’ confidence in the EU ETS, the Union’s main tool to achieve its emission reduction goals. The benchmark contract hit a daily maximum at 5.20 euro (the gains were halted by the local maximum at 5.22 euro) and closed the day 1.6% higher.

In the last 6-7 trading days the 5.00 euro level proved a good support. Should the slightly higher auction supply or a disappointing UK election result push the price lower, the next support is a Fibonacci level at 4.70 euro. To the upside, the 5.22 euro level is the first resistance to break, followed by a Fibonacci level at 5.30 euro and a local high from 5.47 euro. 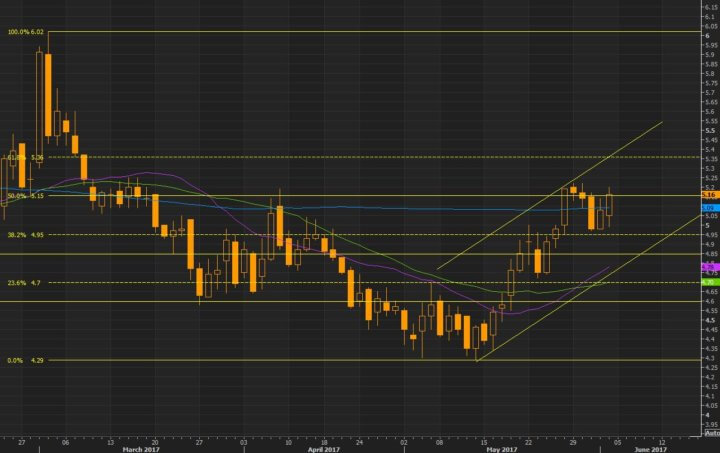