Vertis – Although it opened the day flat compared to previous Friday’s settlement, the EUA Dec17 fell quickly to a daily minimum at 5.10 euro Monday morning. The shock didn’t last long and the contract recovered to trade comfortably between 5.19 and 5.23 euro before the auction. The strong auction result then lifted the price to a new daily maximum at 5.29 euro. The worsening of the dark spread capped the gains. The benchmark contract therefore finished the day at 5.23 euro (+1.0% d/d). Monday’s candle was another doji, indicating the uncertainty of market participants about which direction to take. On the other hand, the 30DMA climbed above the 200DMA, generally considered as a positive signal. The traded volume of 5.7 million in the most liquid contract reflected summer mood already.

The benchmark carbon market moved flat in the first hours of trading on Tuesday, but the surprisingly strong auction result lifted the price to a daily maximum of 5.38 euro. Traders realized shortly after the auction that the high clearing price might have been a mistake and does not reflect real demand for the allowances. So the price returned to 5.30 euro where it stagnated until the end of the day. The closing price represents a gain of 7 cents (+1.3%) to Monday’s settlement. The price closed at the upper edge of the 5.10-5.30 euro range it was trading last week. It also managed to close above the 20DMA.

The EUA Dec17 traded comfortable in a range between 5.25 and 5.30 euro most of Wednesday. In the afternoon however buyers lifted the price above the strong resistance level at 5.30 euro. The price was unstoppable until 5.43 euro, a level not seen for 2 weeks. The price remained close to its daily maximum and settled at 5.43 euro, a gain of 2.5%.

The front year contract opened with a two cents gap down on Thursday and fell quickly to a daily minimum at 5.37 euro. Although the settlement price of the auction was slightly below the secondary market price, the cover ratio was the second best for the week, so the price started climbing higher again in the afternoon. The daily maximum was 5.45 euro, a 2-week high. By the end of the day the price retreated a little, and closed the day at Wednesday’s settlement price, at 5.43 euro.

After opening at Thursday’s settlement price, the EUA Dec17 was able to hit a daily maximum at 5.46 euro, but after the weak auction, sellers pushed the market lower continuously. Price hit a daily minimum at 5.32 euro and stopped just above the 20DMA. The price was not able to recover, and closed the day (and the week) at 5.35 euro.

Beside the energy fundamentals, auction results will be the most important factors to influence the price of allowances. As market participants had enough time to price in the reduced auction supply, we expect the price to move between 5.00 and 5.60 euro. 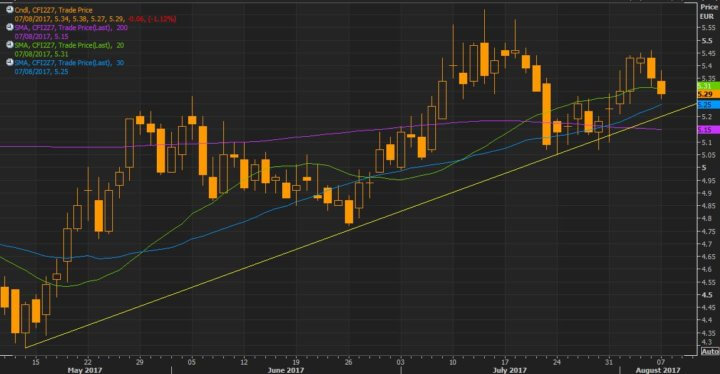