Vertis – With only three auctions and the German front year power price climbing back above 30 EUR / MWh, the benchmark carbon contract was able to climb above 5 euro again.

The EUA Dec17 opened with a 6 cents gap up on the first trading day of the week. The strong auction lifted the price to a new 1-month high at 5.00 euro in the afternoon. After retreating from the daily maximum, the price closed at 4.91 euro, forming a doji candle that signals indecision of the market which direction to take.

After Monday’s doji candle, the EUA Dec17 opened with a 4 cents gap down on Tuesday, but it was able to hit a daily maximum at 4.96 euro during the day. An attempt to break above the 5.00 euro level, however, failed. In the last two hours of trading bears invaded the trading floor and pushed the price sharply lower. The benchmark contract fell to a daily minimum at 4.72 euro and was not able to recover by the time the market closed. It settled at 4.75 euro, a loss of 3.3% in a daily comparison. The traded volume of 18.3 million in the Dec17 contract was the highest since the last trading day of April (the compliance deadline). Despite the negative day, the MACD has been lifted above the zero line which is a bullish signal.

The benchmark carbon contract opened flat on Wednesday, and slipped just one cent down, before it started rallying towards 5 euro again. The price hit an intra-day maximum at 4.94 euro, and remained above 4.90 euro until the market closed (+3.2%).

Supported by the lack of auctions, EU carbon allowances rose for the 7th time in 8 days on Thursday, trading near the 1-month high reached earlier last week. After some initial hesitation, the price climbed continuously higher to hit the 5.00 euro level for the second time after Monday. Gains were kept until the last minutes of trade and the benchmark carbon contract closed at 4.98 euro, a gain of 1.4% in a daily comparison. The volume, however, was extremely low at 5.6 million compared to the 11-18 million in the three first trading days of the week due to a public holiday in many European countries.

After a strong opening the price did not hesitate long and it climbed to reach a new monthly high at 5.19 euro (last seen 7 April) on Friday. The price broke above the 200DMA at 5.08 euro as well. The contract settled at the daily maximum, with a gain of 19 cents or 4.2% from Thursday’s settlement price.

In the last two weeks, when the price left the declining trend channel and the MACD climbed above the zero line, the technical picture got rosier.

The two warning signals are, however, that the price trades above the upper Bollinger band and the relative strength index is approaching the overbought territory.

In addition, auction supply increases by 29% in a weekly comparison and the dark spread also turned lower last week.

We therefore have a balanced view on the price and expect the EUA Dec17 to move between 4.70 and 5.45 euro this week. 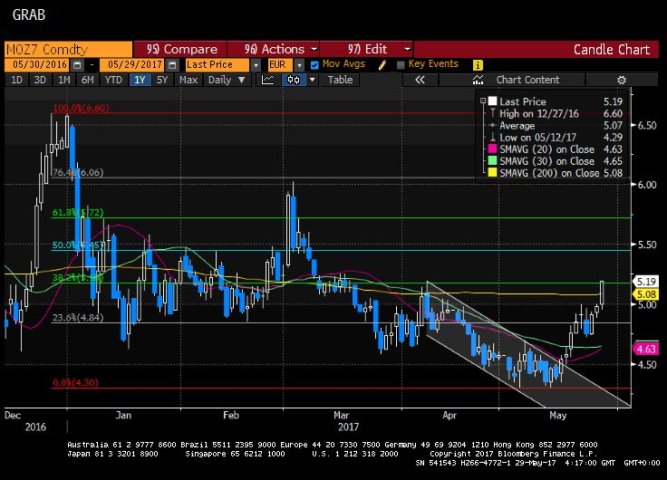