The EUA Dec17 had a sleepy start to last week. The price traded comfortably in a 10 cents range between 5.39 and 5.49 euro. No new local minimum or maximum was reached. The price closed at 5.44 euro, closer to the upper edge of the daily range (+0.4% d/d). The traded volume decreased further. Last Thursday 18.5 million allowances traded in the benchmark contract, the Friday before this fell to 9.5 million and on Monday to 7.6 million.

The price of allowances posted another day of marginal gains on Tuesday. The front-year carbon contract rose steadily throughout the session receiving a push from the healthy auction results to test the upside at 5.58 euro in the late afternoon. However, the last half an hour of trading brought the prices back and they slipped almost to the daily lows. The EUA Dec17 contract closed the session at 5.46 euro, up 0.02 euro from the previous close.

The benchmark carbon contract was held in a 10 cents range on Wednesday. The price held relatively stable the whole day, but in the last hour of trading sellers pushed the price down by several cents. The EUA Dec17 finished the day at 5.39 euro, down 7 cents from Tuesday.

The price of the EUA Dec17 traded in a 5 cents range until noon on Thursday, but due the selling pressure in the last hour of trading the EUA Dec17 closed at its daily minimum, at 5.30 euro on Thursday, a loss of 9 cents or 1.7%.

Although Thursday’s close at the daily minimum did not bode well for Friday, the EUA Dec17 opened stable on the last trading day. News about a stricter EU process regarding diesel cars however soured the investor mood globally. Brent lost 2.5%, stock markets turned sharply lower and the carbon market was no exemption. The EUA Dec17 fell to a daily minimum at 5.07 euro and was not able to recover by the end of the day, finishing the week with a loss of more than 6%.

The negative mood that reached the market last week might be dented by the fact that daily auction volumes will be halved soon.

Sellers pushed the price on Friday below the main moving averages, but the price only fell to the lower edge of the increasing trend channel that started mid-May and managed to remain in it.

Should the price fall from the trend channel, the first strong support is the June minimum at 4.77 euro.

If the looming reduced supply supports the price enough, the benchmark contract might retest the Fibonacci level at 5.36 euro. 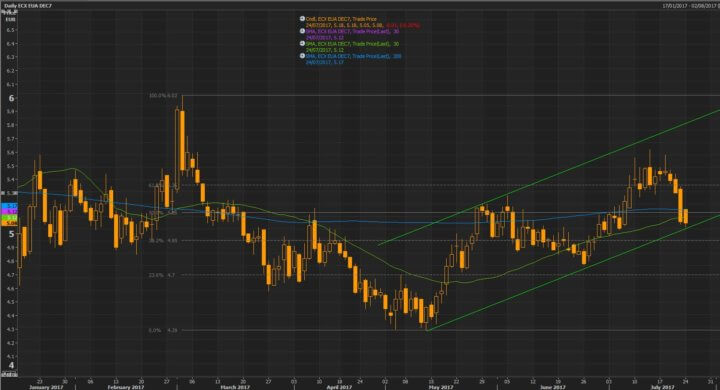