Vertis – Although the unexpectedly weak auction result pushed the price to a new 2-month low at 7.08 euro, the EUA Dec17 was able to recover last Monday afternoon and after the heavy losses of the previous week, it gained 0.8%. The volume traded in the benchmark contract reached 22.3 million, the highest since 23 November.

On Tuesday, the EUA Dec17 opened with a 4 cents gap up as pipeline shutdowns lifted gas prices in Europe. The strong auction result lifted the price further to a 1-week high at 7.46 euro, but it was not able to retest the moving averages near 7.50 euro. The price turned lower in the afternoon and hit a daily low at 7.12 euro and finished with a loss of 0.8%. The traded volume of 32.8 million in the Dec17 contract and 22 million in the Dec18 contract was exceptional. The fact that the price was not able to maintain the gains from the morning was a negative signal.

The benchmark carbon contract lost an additional 1.0% on Wednesday. Although the price hit a daily maximum at 7.20 euro in the morning, the weak auction, restored gas supply from Baumgarten and the auction price gravity pushed it towards 7.00 euro. The price hit a daily minimum at 7.02 euro and was not able to recover by the end of the day which resulted in a settlement price of 7.07 euro.

The EUA Dec17 had a very volatile day on Thursday. Although it opened with a 6 cents gap up, it started to decline sharply in the morning hours already. After breaking below the support levels near 7.10 euro and even below 7.00 euro, the fall seemed unstoppable. The price hit a daily minimum at 6.94 euro, a level not seen since October. Prices starting with 6, however invited buyers and the benchmark carbon contract returned above 7 euro in the afternoon. It even managed to gain 2 cents compared to Wednesday’s settlement price.

After opening at the previous settlement level on Friday, the EUA Dec17 turned sharply lower and hit a daily minimum at 6.96 euro. (Thursday’s minimum at 6.94 euro could not be reached.) The strong auction result and higher prices in the energy mix however had a positive effect on the carbon market and the price jumped almost 20 cents in a couple of minutes. In the afternoon, the price hit a daily maximum at 7.22 euro and it closed the day at the upper edge of the daily range with a gain of 1.3%.

Although the declining trend that started in December is still valid, the price seems to have bottomed out at 6.94 euro for the time being. The lack of auctions from Tuesday, 19 December will support the price. Last days’ hedging and “window dressing” are also expected to support the carbon market. Temperatures, however, are forecast to remain above the seasonal average with high wind supply. These energy fundamentals are expected to cap potential gains of the carbon price.

Our range for this week is between 6.80 and 7.50 euro. The Dec17 contract expires on Monday, 18 December meaning that the technical levels of the Dec18 contract will be observed. 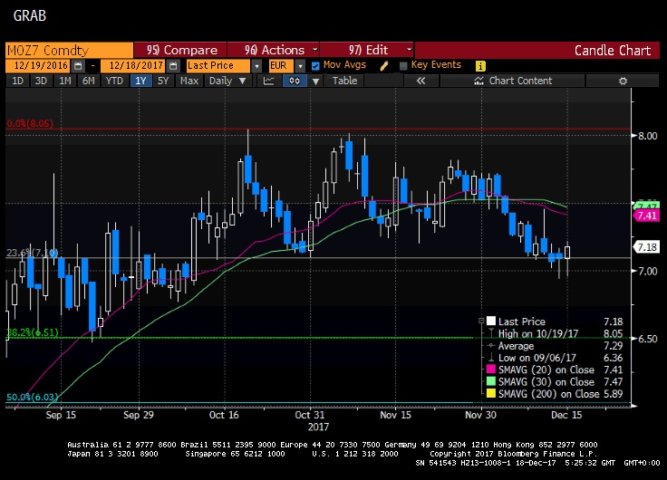