Vertis – Despite some weakness in the beginning of the week and falling power prices, the EUA Dec18 gained 3.0% last week.

Last Monday, the EUA Dec18 opened with a 6 cents gap down from Friday’s settlement price and fell quickly to a daily and a two-week low at 8.62 euro, just one cent above the 20DMA. The price managed to recover before noon already and climbed continuously to hit a daily maximum at 9.15 euro. The contract closed at 9.07 euro, a gain of 11 cents or 1.2%.

After opening in line with Monday’s settlement price at 9.07 euro, the EUA Dec18 fell quickly to 8.74 euro in the first hour of trading. Apparently, the price recovered then, but the weak auction result and the low power prices pushed the price to a new daily low at 8.67 euro in the afternoon. This was the second test of the 20DMA. The benchmark contract finished the day at 8.80 euro, a loss of 27 cents or 3.0%. The declining price pushed the MACD below the signal curve, providing a bearish signal.

Wednesday was another volatile day for the carbon market. The EUA Dec18 started the day in a negative mood and fell to a daily minimum at 8.68 euro, the 20DMA that proved a good support for the third day and redirected the price. Shortly after noon, the benchmark carbon contract increased by more than 30 cents within less than one hour. In a second round of rally, the EUA Dec18 hit a new weekly high at 9.21 euro. Despite some sell-off by the end of the day, the price remained close to 9 euro and closed the day with a gain of 2.2%.

After three volatile days, the carbon market calmed down on Thursday and outperformed other components of the energy mix. The EUA Dec18 opened with a 6 cents gap down, but despite this negative start, it was able to climb higher during the day and closed at 9.12 euro, a gain of 13 cents. The traded volume of 16.8 million allowances was the highest of the week.

After Thursday’s rally the EUA Dec18 had a weak start to the day on Friday and opened with a 7 cents gap down. The weak auction result pushed the price to a daily minimum at 8.97 euro, but—repeating the pattern of the previous days—buyers took over the floor after noon and lifted the price to a weekly maximum at 9.36 euro. The price closed at 9.23 euro, a gain of 11 cents (+1.2%).

In the last week, the 20-day moving average and the mid-Bollinger band provided a good support to the EUA Dec18 price. If they continue to do so, the room to the downside, below 9 euro will be limited and the price could retest the 2018 high at 9.56 euro. Coal prices falling further might strengthen the carbon market further. In a negative scenario, last week’s minimum at 8.62 euro and the 30-day moving average at 8.53 euro will be the first support levels. 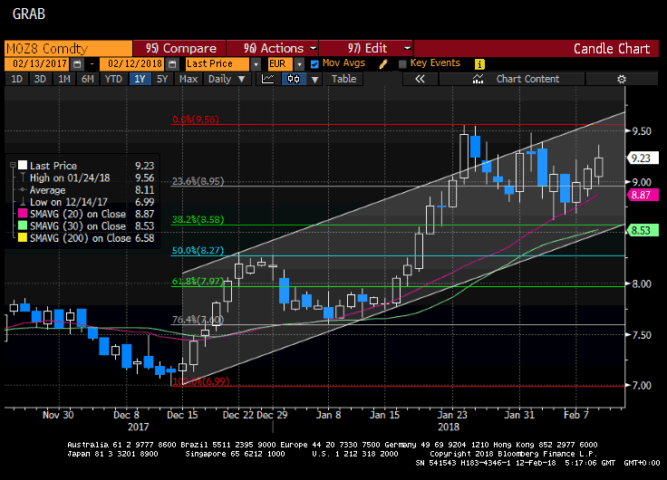