The EUA Dec18 opened with a ten cents gap up las Monday helped by positive global market mood. The disappointing auction result however pushed the price down to a daily minimum at 9.57 euro. Still, there was a five cents gap left that will work as support in the future. Repeated warnings about the sudden stratospheric warming lifted gas, coal and power prices in the afternoon and the carbon market moved in tandem. The benchmark carbon contract hit a daily maximum at 9.93 euro and finished the day with a gain of 3.8%.

On Tuesday, the carbon price opened with a 6 cents gap up again. It managed to increase however to 9.97 euro only, and turned sharply lower in the morning already. The weak auction result just accelerated the decline. The price hit a daily minimum at 9.64 euro, but recovered by the end of the day to close at 9.72 euro (-1.6%). The traded volume of 18.3 million was the highest since last Wednesday.

The decline continued on Wednesday. The price opened at 9.67 euro, 5 cents below Tuesday’s settlement price. In the first 10 minutes of trading, the price was still able to hit a daily maximum at 9.74 euro (and by doing so it closed the morning gap), but declined right after. The price hit a daily minimum at 9.49 euro in the afternoon, but was able to recover slightly by the end of the day. The benchmark contract closed at 9.56 euro.

As the last 10min candles of Wednesday indicated (the price increased above the short term declining trend line), the EUA Dec18 had a strong start to the day on Thursday. Despite opening with a five cents gap down and hitting a daily minimum at 9.41 euro, the price recovered quickly and hit higher and higher levels in the afternoon. The daily maximum was 9.77 euro. The price settled at 9.72 euro, a gain of 16 cents or 1.7%.

The EUA Dec18 advanced by further 1.1% on Friday. The price opened with a 3 cents gap up at 9.75 euro. The weak auction result pushed the price to a daily minimum at 9.65 euro, but the price recovered due to heavy compliance buying. It hit a daily maximum at 9.90 euro, and closed just 9 cents below this level. The traded volume of 23.7 million was the highest of the week.

Although in the last two weeks, the benchmark carbon contract consolidated between 9.30 and 10.02 euro, the short-term (from December 2017) and long-term (from May 2017) increasing trends are both valid. Last week, the price was well supported by compliance purchases and the cold spell pushing temperatures in Europe below the seasonal averages. The strength of the carbon price is even more surprising, considering that member states are about to distribute the2018 free allocation to installations and the German dark spread slipped deep into negative territory on jumping coal prices.

The looming reforms of the EU ETS, however, seem to be strong enough to keep the price on an increasing path. Contrary to the practice of the previous years, installations purchase their shortage in the market instead of borrowing allowances from this year’s free allocation, because after looking at the price chart, they expect the EUA price to be higher in April 2019.

Should the positive trend continue, the price could break above the 2018 high at 10.02 euro and test another local maximum at 10.25 euro.

In a negative scenario, the price is seen well supported at 9.30 euro. 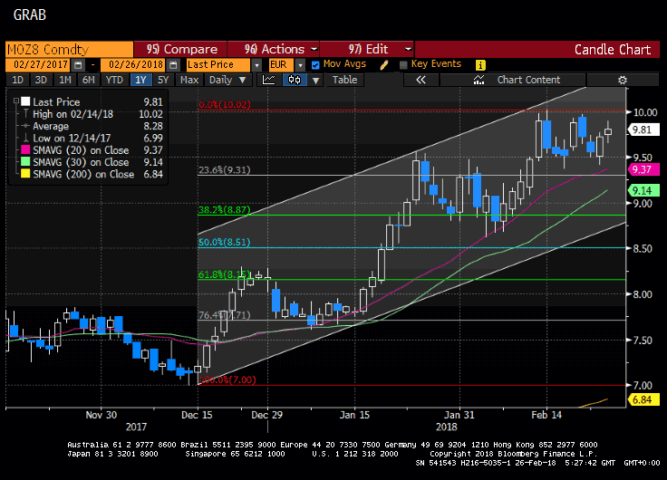