Auctions on EEX attracted an exceptionally high number of bids and the almost all the auctions of the week cleared at a premium compared to the secondary market.

Compliance buyers contributed to the price increase, although Uniper for example reported having slowed down hedges until power prices catch up with carbon. Latter will increase demand in the future, which is bullish for the carbon price.

The benchmark carbon contract hit a new six year high last Monday at 10.40 euro. The price received support from higher prices in the energy mix and a strong auction that attracted 30 bidders. The price opened with a 4 cents gap down and hit a daily minimum at 9.98 euro, but it recovered quickly  and increased in the rest of the day. It settled at 10.36 euro, a gain of 2.2% from last Friday.

The EUA Dec18 hit a new six year high on Tuesday at 10.60 euro. The price opened with a six cents gap down, but after hitting a daily minimum at 10.26 euro, it recovered and umped to a daily (and six-year) maximum at 10.60 euro after the strong auction. Traders took profit in the afternoon and the price closed at 10.47 euro, a gain of 11 cents or 1.1%.

After two days of higher prices, the EUA Dec18 had a weak start to the day on Wednesday, but buyers lifted the price to a new six-year high in the afternoon. The benchmark contract kept its gains until the end of the day and closed at 10.64 euro, its highest settlement level since 2011 (+1.6% d/d).

The front year carbon contract passed 11.00 euro on Thursday. The price opened with a 3 cents gap down in the morning, but increased continuously during the day. The rally accelerated after the surprisingly strong auction and when the price crossed earlier local maximums. 11.13 euro was the highest level of the day and the price settled just one cent lower. The traded volume of 21.7 million allowances was the highest since 27 February.

After the five white candles, market participants expected a correction on Friday. And indeed, the benchmark carbon contract opened the day with a 7 cents gap down, at 11.05 euro. In the first hour of trading however, the price recovered and hit a new seven year high at 11.26 euro. From this point the price declined continuously to hit a daily minimum at 10.84 euro, but the afternoon brought the buyers back to the market and they lifted the price above 11 euro again. The front-year contract closed flat to Thursday’s settlement, at 11.12 euro.

The European Commission published its first statistics about the 2018 free allocation. A total of 562.3 million allowances have been distributed out of the 756.58 assigned for this year (74%). It is a positive signal that the carbon price managed to increase in a period when bulk of the free allocation was distributed. Considering the increasing price trend, companies decide not to borrow from the 2018 allocation, but purchase their shortage in the market.

Technically, the price got overbought in the last week (based on RSI, Bollinger bands and MACD) and some market participants might decide to take profit from the recent rally that lifted the price by 2 euros within one month.

In the case of a correction, the first support level is the 11 euro level, followed by a Fibonacci retracement at 10.25 euro and the 20DMA at 10.02 euro. 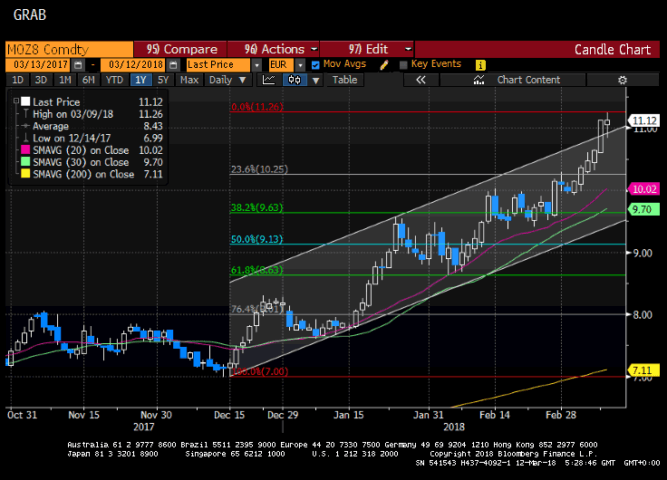